In this newsletter you can read about:

During the last weeks the Greek elections have become a central issue for a wide variety of social actors, from the investment funds to the grass roots. The prospect of a victory of Syriza has attracted commentators from all sides. The debate has been also heated by social movements and civil society organizations in Greece and all over Europe. In this special issue of TroikaWatch we propose an overview of the mobilisation this debate has provoked, few days before these important elections. 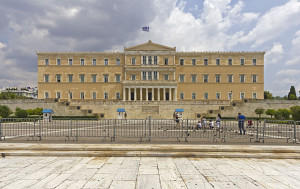 A victory of Syriza will force all political actors to position themselves regarding certain anti-systemic proposals. There are passionate debates about to what extent the agenda proposed by Syriza is coherent with the struggles led by many progressive, left or anti-systemic movements during the last years. These debates will still be open after the elections. What is certain is that there are some actors that can consider Syriza as an ally to work with (even from a critical perspective):

At the same time Syriza will need the support of these (and other) social movements, staring in Greece to be able to meet the expectations its victory will provoke. We propose to cover these questions in next issues of TroikaWatch after the elections.

What is at stake?

a background article by Marica Frangakis, member of Attac Hellas

(Greek Commissioner and Vice-President of the Greek Conservative Party ND) himself expresses a need for a greater flexibility of the Stability Pact for the countries in the European South.
Photo source: EU

(columnist of the Financial Times) has written “Radical left is right about Europe’s debt”.
Photo source: Institute of International and European Affairs (IIEA) – Youtube. Licensed by CC BY 3.0

Several personalities express hopes linked to a change in Greece

speaks in the French newspaper Liberation about a shock needed to make Europe move. The article is translated to Greek

, express his hope on a democratic change in Greece in an English interview with Greek subtitles for Greek conservative newspaper Kathimerini.
Photo source: UNCTAD. Licensed by CC BY-SA 2.0 from Flickr.

explains in his blog on the webpage of the New York Times, that the danger is in continuing current policies.
Photo source: Prolineserver (talk) – Eigenes Werk. Licensed by GFDL 1.2 from Wikimedia Commons.

speaks in an article of “Europe’s Lapse of Reason”.

suggests in an article “What if SYRIZA took the EU at its word and audited Greek debt?“
Photo source: CADTM

has been launched by Transform! Network

, with around 3.500 signatories (300 first signatories and many others…). It has been also relayed in Italian

Transform! has also translateded the Thessaloniki program of Syriza

which has collected more than 7.000 signatures.

has issued a statement

calling for a victory of radical left in Greece.

has issued during its meeting in Dublin on January 10th, a declaration which has been released in several languages including Hungarian and is available in Greek

European tour of actions and initiatives in different countries

of a campaign called “Griechenland entscheidet” has been set on December 2014, which follows Greek election news and relays actions and calls

On February 17th, there was a demonstration in Brussels organized by several organizations and political parties from Brussels and Belgium announced in French

One of the first appeals to support Greek voters has as title TROIKA BASTA. It has been published in French

on http://troikabasta.wesign.it/ and collected more than 16.000 signatories since January 5th.

signed, together with a lot of other French political organisations, trade unions and citizens associations a statement Let us support the right of Greek people to take over their destiny

has been initiated on January 18th, by the signatories of the Nantes Appeal of 2011, in which French citizens were declaring themselves Greek, by solidarity.

Main action has been a meeting in Paris, Gymnase Japy, on Monday, January 19th attended by 1.400 participants and followed by streaming by more than 6.000. The meeting was for Syriza and the right of the Greek people to make their own choice without interference from the Commission, the Troika, etc. All the parties to the left of the Socialist Party in power, several trade unions and social movement organisations like Attac have joined. Susan George notes: “It’s worth noting that it is most unusual to have an electoral rally when the election is not in France or about French politics, particularly with so many participants–I can’t recall another instance.” See here

has organized an action/rally at the old ECB building in the centre of Frankfurt on Sunday, the 18th of January. 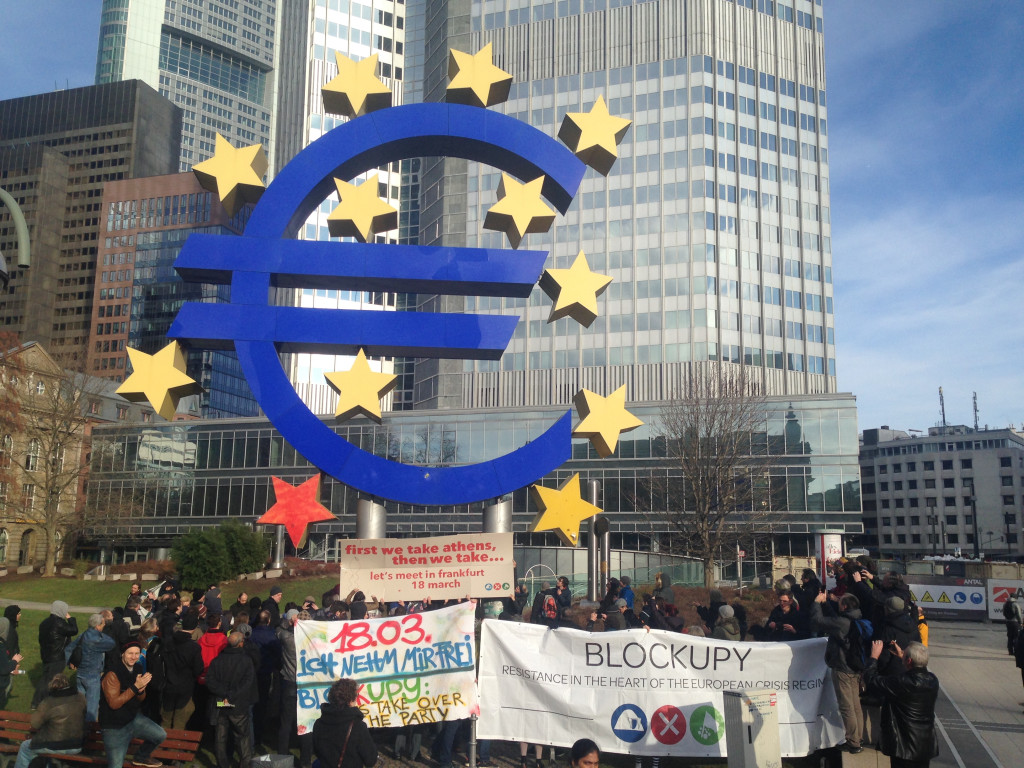 In Berlin people of several groups for solidarity with Greece made a short theater perfomance in front of the financial ministry during the ‘We are fed up!’

demonstration, which each year protests against massproduction in the agricultural industry

In several German cities groups for solidarity with Greece are active and organize events to inform people about the situation in Greece and what is at stake in ofrtcoming elections. More information about this groups you can find in there blog

has been set and organized a travel of activists in Greece, during the campaign, called “BRIGATA KALIMERA – G25”.

A big event was organized in Amsterdam, on Greek elections on Sunday 17th in the afternoon with film screening and political discussions with as theme: “Are Greek elections, on January 25th, threatening Europe?” 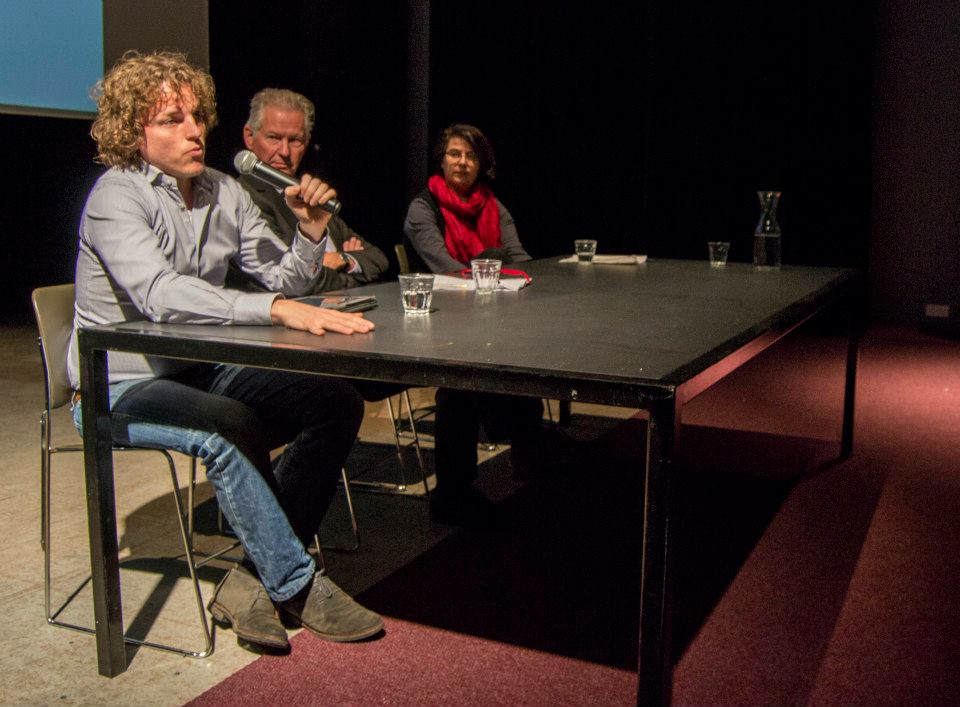 was launched on January 17th expressing the support of people from Valencia to Greek people, for a change in Europe. A demonstration was planned on January 20th. 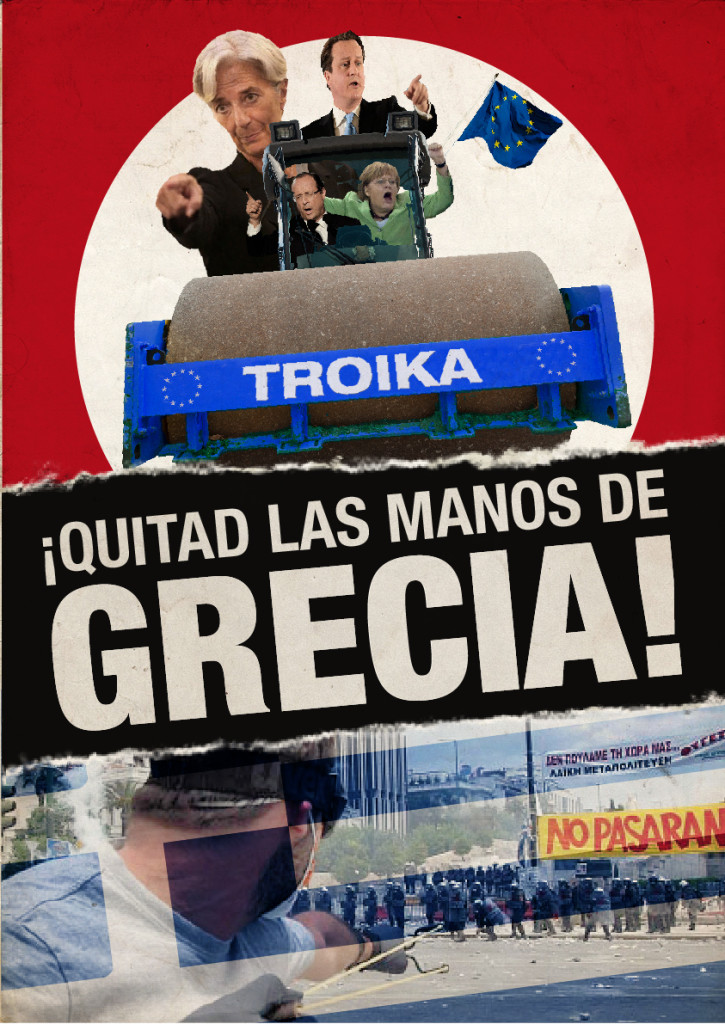 Poster for demonstration in Valencia

, after an emergency organising meeting at the start of January, has organised the following events:

7th of January: Welcoming Anti-Austerity Party for Merkel at the British Museum 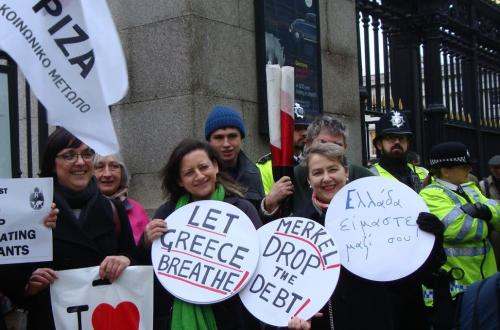 Welcoming Anti-Austerity Party for Merkel at the British Museum

Almost 100 people attended a briefing on the forthcoming elections in Greece in the Diskus Room at UNITE the Union’s Head Office. Chaired by Kate Hudson, with speakers including Stathis Kouvelakis (Syriza Central Committee), Costas Douzinas (Syriza and Birkbeck College Director of Humanities) and Paul Mason (journalist in a personal capacity). 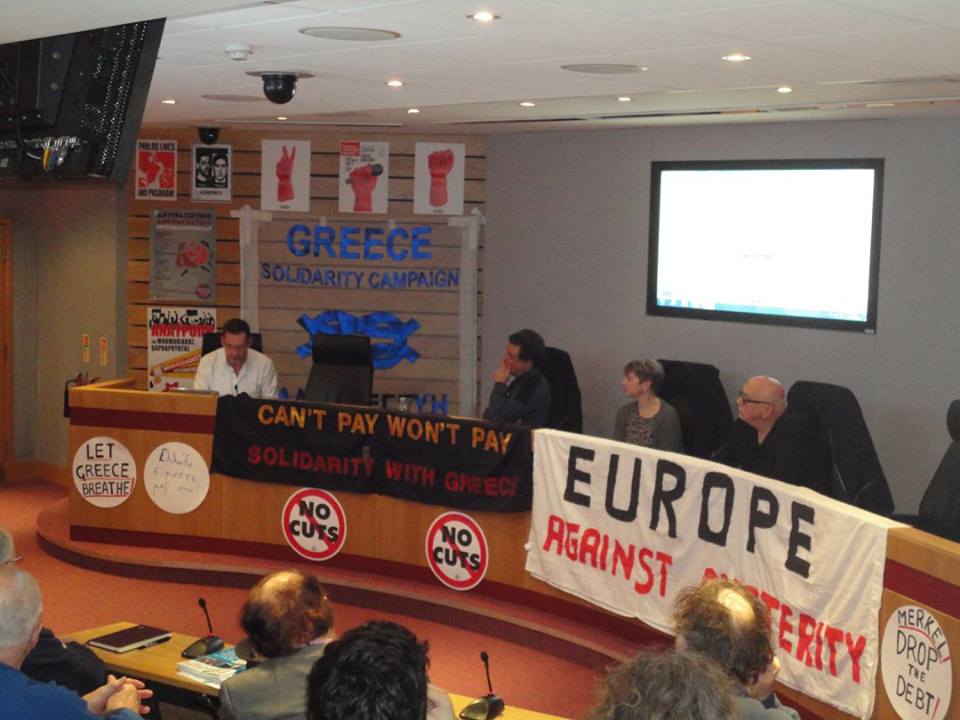 More Photos on this event you find here

TroikaWatch is created by a diverse group of people: some of us work for civil society organisations like the Bretton Woods Project

, others are activists in networks such as Attac

or the Spanish 15M social movement.

We plan to publish this newsletter once a month in English

This newsletter is published under Creative Commons License 2.0. Please name http://www.troikawatch.net/5th-newsletter-from-troikawatch/ as the source of this newsletter. The embedded content (videos, images) is not ours and therefore falls under the copyright of the owner of those copyrights.

The TroikaWatch Team wants to thank Trommons.org (the Rosetta Foundation) and their translators, as they have been of great help, allowing us to publish this newsletter in many languages.

This post is also available in: Dutch, French, German, Greek